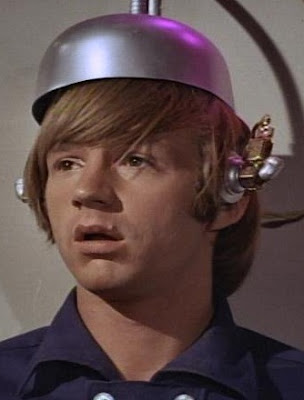 Peter Tork and the New Monks held the concerts in Japan in August, 1981.
I saw the concert with my friends (fans of Peter). 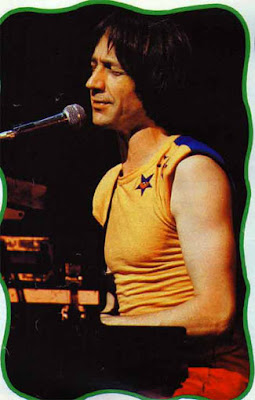 On that day, we were waiting for the concert to start at the hall. Our seats were relatively close to the stage. My heart was throbbing with excitement.

And the concert started!

The spotlight shone in the center of the dark stage.
Peter Tork with his banjo appeared in the spotlight!

It was my first time watching "REAL Peter Tork" playing the banjo live. Not on TV. I was very excited. 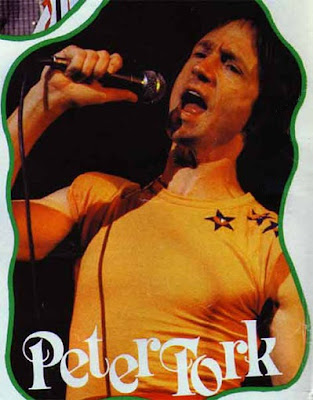 I think he wore this yellow clothes. When I watched this clothes in this concert, I thought "The stars on the shoulder are so cute!". I remember that.

Peter played the music of instrumental on the banjo absorbedly. He was so hot! He played the banjo very cool. His blond hair was so beautiful. He was youthful. Peter was very passionate.
I kept screaming "Peter! Peter! " All audience kept screaming.

Peter played the banjo violently on the end of the first song, and he began to play the 2nd song "Crippie Creek" without a moment's pause!
That was awesome moment! The sequence was brilliant. I got goose bumps all over before I knew it. I was so moved.

It was my first time listening to his singing voice. Not on TV. His real voice.
His singing voice was wonderful. The play of his banjo and keyboard was amazing. Songs that Peter made were awesome. I was so excited. And I danced like crazy! :D 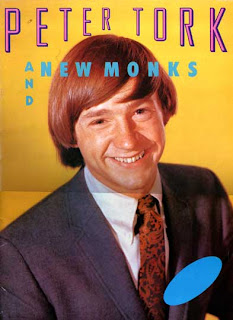 front cover of this concert program

During the interlude of "Higher And Higher", Peter sometimes stuck out the tip of the neck of the banjo toward the audience. I was swept away by his wonderful banjo playing.

When Peter sang "Lucille", he danced in a frenzy. Peter was preternaturally sexy and wild!
His "Lucille" was too sexy.XD  His sexy "Lucille" at this time will be recorded in history.

And the all audience sang "Daydream Believer" in chorus. And I heared "Your Auntie Grizelda " live. Not on TV. I was very glad. 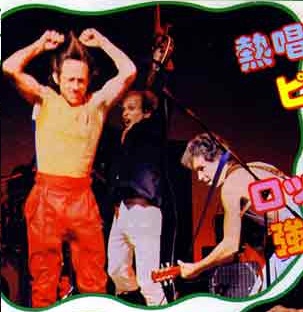 His sweet smile melted my heart. Peter jumped intensely many times. Peter swung a microphone. He was so hot! Peter Tork and the New Monks had a lot of chemistry.

This concert was full of rock'n'roll. It was very enthusiastic.
I think he loved rock'n'roll in those days. In those days, on Japanese TV program, Peter was asked, "What kind of music would you like to do?", and he answered "rock'n'roll! " .

Time passes so quickly. When Peter sang the last song "(I'm Not Your)Steppin' Stone" , all audience were delirious!

From the beginning to the end, this concert was absolutely amazing! I love this concert of Peter Tork and the New Monks! This concert is the best in my life.
(And now, I wanna go to Peter Tork & Shoe Suede Blues's concert !) 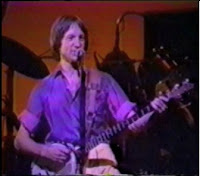 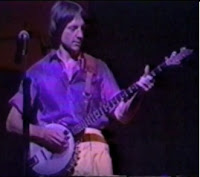 At that time I was influenced by Peter Tork, I  bought a banjo. I was a student.
I accumulated pocket money. I bought the cheapest banjo.

I wanted to be able to play banjo like Mr.Peter Tork. I wanted to play "Crippie Creek" and "Higher And Higher" on a banjo.
But it was very difficult for me to play a banjo. I couldn't even tuning. I gave up playing the banjo in a few days. I should have worked harder...
I have put the banjo on my parents' home. Oh, I want to apologize to my banjo. 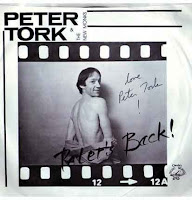 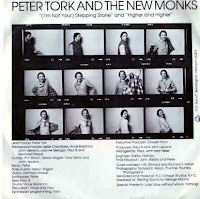 I got this record At that time! " Higher And Higher " "(I'm Not Your)Steppin' Stone" 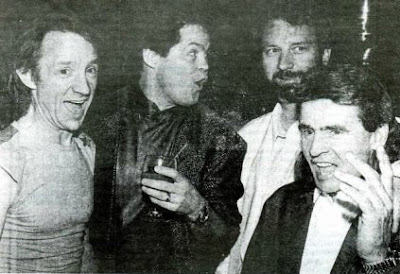 BTW, Is the Peter's clothes of this monochrome photo the same as that yellow clothes which he wore in the concert? Both clothes have stars on a shoulder.
If that's the case, it means that he had had the yellow clothes for more than ten years.
Sorry, I made a mistake. "more than ten years" is wrong.
Probably "about five years" is right. I'm very sorry.
He takes good care of his clothes.:)

my other blog post; I got Peter's autograph,and handshake!(1981) :
http://ilovepetertork.blogspot.jp/2012/06/i-got-peters-autographand-handshake1981.html 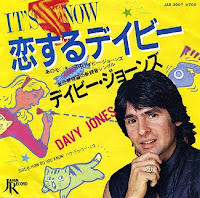 Davy Jones:
I went to the concert of Davy Jones in Japan in spring of 1981. I was very excited. Davy ran about on a stage, and he sang emotionally. I was so moved.
Davy sang  "I want to be free", and I thought that I wanted him to sing "I wanna be free". :) 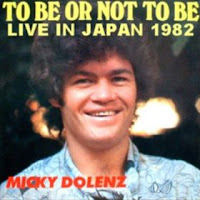 Micky Dolenz：
I went to the concert of Micky Dolenz in Japan in 1982. I think Mickey's clothes were black. His funky singing voice was splendid as ever.
Mickey greeted in Japanese language, looking at a memo. He said "nihon no minasan konnichiwa! boku wa Micky Dolenz desu! ". It means "Hello, Japanese fan! I'm Micky Dolenz! ". I thought "Mickey is a nice guy! "

I didn't go only Mike's concert. Only Mike Nesmith hasn't held a solo concert in Japan.
I want to meet Michael Nesmith...
Posted by shypinkbanjo at 7/02/2012

shypinkbanjo
●I'm a big fan of Peter Tork! Shoe Suede Blues! Monkees! ●I'm a Japanese woman. ●Sorry,I'm not good at English. ●In 1981, I went to the concert of Peter & New Monks, Japan! Shinjuku! It was a marvelous performance...!! And,I got Peter's autograph,and handshake! He was very kind.... ★And now, I wanna go to Peter Tork & Shoe Suede Blues's concert !!